What is Bidding Zone Review (BZR)?

According to Commission Regulation (EU) 2015/1222 (CACM), bidding zones (BZs) should be defined in such a manner as to ensure efficient congestion management and overall market efficiency. In addition, according to the Commission Regulation (EU) 2019/943 (Electricity Regulation under the Clean Energy Package), bidding zone borders (BZBs) shall be based on long-term, structural congestions in the transmission network. BZs shall not contain such structural congestions unless they have no impact on neighbouring BZs, or unless as a temporary exemption, their impact on neighbouring BZs is mitigated with remedial actions and those structural congestions do not lead to reductions in cross-zonal trading capacity in accordance with the requirements of Article 16 of the Electricity Regulation.

Following the implementation of Commission Regulation (EU) 2019/943 (Electricity Regulation under the Clean Energy Package), all TSOs have to conduct a common study on alternative BZ configurations: the so-called bidding zone review (BZR). It is a 12-month process with the purpose to increase economic efficiency and cross-zonal trading, while maintaining security of supply in the EU.

History of the BZR Process

Article 14 of the Electricity Regulation triggers the BZR process; however, the actions prior to and after the review are outlined below:

Main deliverables of the BZR

The main deliverables of the BZR study are:

Decision on adoption of alternative BZ configuration: Following the 12-month BZR process under Article 14(8) of Electricity Regulation, those Member States that have opted to amend the BZ configuration, shall reach a unanimous decision to maintain or amend the BZs in 6 months. In the case the Member States cannot reach a unanimous decision, the European Commission, as the last resort, in consultation with ACER shall adopt a decision in 6 months.

The Bidding Zone Review is performed as follows:

This setup was chosen to reduce model complexity and to be able to consider regional specificities and sensitivities, while involving all TSOs. 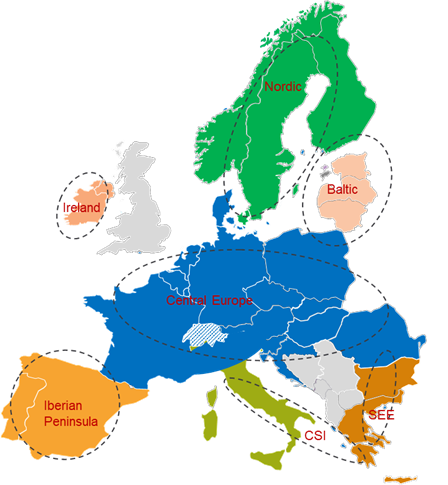 For affected BZRRs, several alternative BZ configurations have to be studied. The target year, which is to be investigated, is the year 2025.

In total, 22 indicators grouped into 4 categories have to be assessed in the BZR, as shown below:

With the output of these 22 indicators, the TSOs will conduct the following evaluation process as established by the BZR Methodology, in order to finally come up with a recommendation for each region on whether to keep the current bidding zone configuration or whether to adjust it.

The steps, as defined in the BZR Methodology, for assessing the output of the 22 indicators, are explained in the figure below:

Alternative BZ configurations to be investigated

ACER’s decision on alternative BZ configurations was issued on 8th August 2022, followed by a news item The following table summaries the proposal from ACER. Additional information can be found in Annex 1 of ACER decision.

Table: Alternative configurations to be considered for the bidding zone review:

According to Article 2 of Annex 1 of ACER’s decision, TSOs must replace the concerned configuration(s) with the corresponding fallback configurations if a unique and unambiguous assignment of nodes to zones cannot be achieved, . Following the ACER decision, a simplified assessment of the node-to-zone assignment has been performed detecting issues for the default configurations 1, 3 and 4 due to the split through the densely-populated, highly-meshed Ruhr area (largest urban area in Germany with many cities, industrial sites and power plants and an extensively meshed 110 kV network). Therefore, TSOs are following the ACER decision and are evaluating the German fallback configurations in the Bidding Zone Review. Specifically, this means that configurations with the IDs 2, 12, 13 and 14 are assessed in the Bidding Zone Review for Germany. Please note that this does not prevent potential issues to occur related to the node-to-zone assignment also for the fallback configurations. More background information on this topic can be found in the material for the Consultative Group Call of 14th December 2022

Pictures of the configurations to be evaluated for Germany shown below: Timeline for the BZR 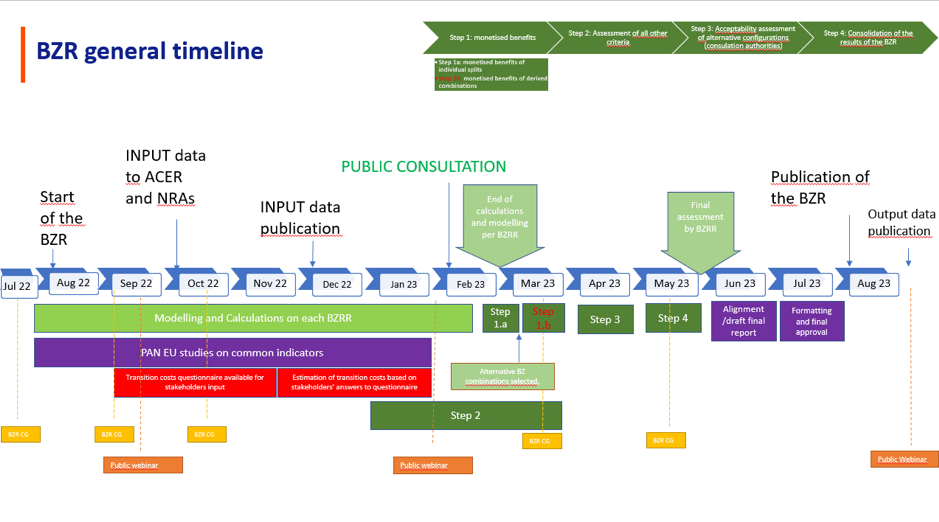 TSOs announced a six-month delay for the BZR process in December 2022 mainly due to the two-step approach of the decision on alternative configurations by ACER. The BZR general timeline is updated as shown below: 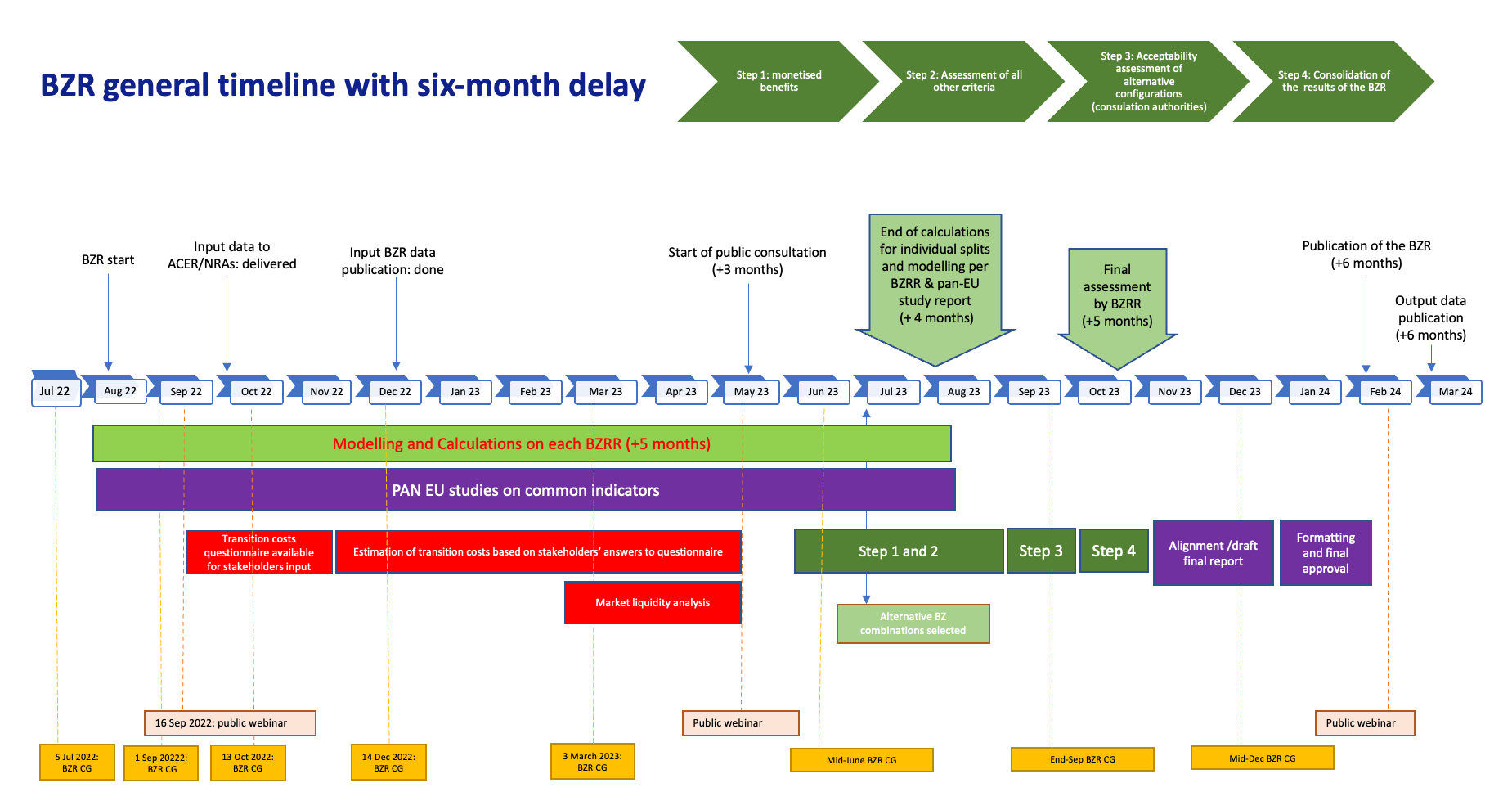 According to Article 16 of the Bidding Zone Review (BZR) Methodology, TSOs shall publish all inputs for the BZR no later than four months after the BZR starts, and all outputs of the BZR no later than one month after the BZR ends. Moreover, Article 16 states the status of certain information as confidential under a given jurisdiction shall not prevent that information from being published in another jurisdiction. The BZR Methodology, and a later ACER decision, put an obligation on TSOs and ENTSO-E to publish data related to the Locational Marginal Pricing (LMP) study.

Following the legal obligations set in Article 16 of the Bidding Zone Review (BZR) Methodology, TSOs are publishing inputs for the BZR on 8 December 2022. Article 16 states the status of certain information as confidential under a given jurisdiction shall not prevent that information from being published in another jurisdiction.

Disclaimer: Data input files published here may be subject to change at a later stage, due to possible feedback from ACER and NRAs on input data submitted in accordance with the legal obligations.

Stakeholder expertise is essential for any discussion of a fundamental market design element such as the BZ configurations. ENTSO-E and the TSOs strive to involve a wide range of stakeholders from the start of the BZR process, with substantial consultation during the review; this includes the Bidding Zone Review Consultative Group (BZR CG), Market European Stakeholder Committee (MESC) as well as public workshops and consultations.

ENTSO-E, on behalf of all TSOs, created the BZR CG to serve as a platform for relevant stakeholders to interact with ENTSO-E and its members on achieving the objectives of the BZR. The BZR CG does not replace the obligation to organise a public consultation on the BZR but is merely an addition to facilitate additional exchanges with relevant stakeholders.

The BZR CG was created on the basis of Terms of Reference drafted by ENTSO-E and the TSOs.

ENTSO-E and the TSOs aim to provide regular updates to the MESC participants during the BZR process.

More information on MESC can be found here

ENTSO-E and the TSOs will be organising regular public workshops with a wide range of stakeholders to provide update on the BZR process.

TSOs of the BZRRs expect to hold a public consultation in May 2023 regarding at least the following aspects:

Once the public consultation is launched, the link to the provided.

To make the information accessible and transparent for stakeholders, key information such as presentation materials, recordings, stakeholder questions & feedbacks is published on this webpage.

GET THE MOST POWERFUL NEWSLETTER IN BRUSSELS